North Carolina is a state of the southeast United States bordering on the Atlantic Ocean. It was admitted as one of the original Thirteen Colonies in 1789. First settled in 1653, it was part of the province of Carolina until 1691 and became a separate colony in 1711 and a royal colony in 1729. North Carolina seceded in May 1861 and was readmitted to the Union in 1868. The state has long been a center of tobacco growing and processing. Raleigh is the capital and Charlotte the largest city. Population: 8,680,000. 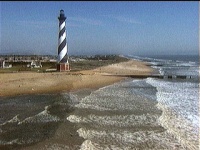 The Great Depression (1929-1939) left thousands without work. North Carolina and the federal government created jobs expanding roads and cleaning up state parks. The state improved welfare and reduced state taxes. By the late 1930s, the economy was steadily improving. During the 1940s, construction began on Fontana and Kerr Dam. New medical centers were built and roadways continued to expand throughout the state.

Today, North Carolina continues to improve education and roadways. Traditional industries seem to be doing well, but state leaders are striving to attract new businesses to the state. In recent years the state has emphasized education, industry, and agricultural technology and in each area has achieved many notable successes. Established in 1959 to enhance North Carolina's economic growth, the Research Triangle Park is a unique complex for organizations engaged in institutional, governmental, and industrial research. Three major research universities--Duke University in Durham, North Carolina State University in Raleigh, and the University of North Carolina in Chapel Hill--are both the base and the capstone of the Research Triangle Park.