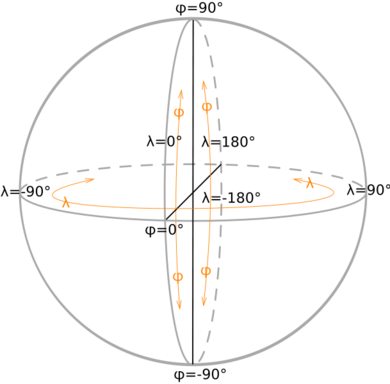 Borrowing from theories of ancient Babylonians, later expanded by the famous Greek thinker and geographer Ptolemy, a full circle is assigned 360 degrees (360°).

By combining these two angles, the horizontal position of any location on Earth can be specified.

For example, Baltimore, Maryland (in the USA) has a latitude of 39.3° North, and a longitude of 76.6° West (Template:Coor d). So, a vector drawn from the center of Earth to a point 39.3° north of the equator and 76.6° west of Greenwich will pass through Baltimore.

This latitude/longitude "webbing" is known as the common graticule. There is also a complementary transverse graticule (meaning the graticule is shifted 90°, so that the poles are on the horizontal equator), upon which all spherical trigonometry is ultimately based.

Traditionally, degrees have been divided into minutes ( ′ ) and seconds ( ″ ). There are several formats for degrees, all of them appearing in a Lat.-Long. order:

To change from DM or DMS to DD, Decimal degrees = whole number of degrees, plus minutes divided by 60, plus seconds divided by 3600. Decimal division is now the most common and standard.

Latitude and Longitude values are established based on an associated Geodetic system or datum such as WGS 84. In other words, the same exact point on the earth’s surface will be expressed by different latitude and longitude values, depending on the reference datum.

To completely specify a location on, in, or above Earth, one has to also specify the elevation. The elevation specifies the vertical position of the location relative to some measure of Earth's surface. This could be expressed in terms of the vertical distance to Earth below, but, because of the ambiguity of "surface" and "vertical", is more commonly expressed relative to a more precisely defined datum such as mean sea level (as height above mean sea level) or the geoid. The distance to Earth's center is a practical coordinate both for very deep positions and for positions in space.

Various elevation / height coordinates either with respect to the surface or some other datum are altitude, height, and depth.