Ken Goldstein was born in Chicago, Illinois in June of 1969. He attended dance school in London and the Art Institute of Chicago before completing his B.F.A. in Art Media Studies at Syracuse University in 1990. During college, he created special effects for films, producing educational videos and freelancing as a cub reporter and photographer for the NewTimes newspaper. 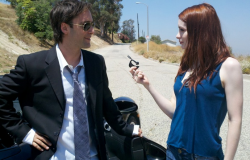 Ken with actress Felicia Day of The Guild

After graduating college in 1990 he returned to Chicago. After a series of special effects jobs for national commercials, Ken was hired by Harpo Studios to co-ordinate the films being produced by Oprah Winfrey. From Harpo, he became the personal assistant to film director, John Hughes (Home Alone, Sixteen Candles, Breakfast Club). At Hughes prompting, in 1992 Goldstein opened his own full service production company, Loxley Hall Productions, and later, Steel Blue Horizon Pictures.

Through Steel Blue Horizon, Ken made a name for himself in the world of educational videos, after-school television specials, and network documentaries, earning a collection of industry awards for excellence in documentary and children’s programming.

At 22 he became a television news commentator and field reporter for FOX News and NBC, a national radio talk show host on ABC/CAPCities, and a columnist for the Chicago Tribune penning, "Friends in Deed", a social activist weekly.

In 1994, Goldstein was hired to produce, write and direct a series of projects for several Oregon based companies including Nike and Will Vinton Animation Studios. He moved to Portland the same year. During his four years in the Northwest, Ken was introduced to the story of Luba Tryszynska, a war hero and survivor of the Holocaust of World War II. He was so taken by her legendary acts of bravery that he packaged her story and sold it to the A&E Network.

In 1998 he was awarded a development contract with Warner Brothers through Rhino Films. He moved to Los Angeles shortly thereafter, and by 1999 began directing a feature documentary film for Barry Levinson. The experience of making, UFOs, JFK and ELVIS: The Movie made him realize that the part of filmmaking he was most passionate about wasn’t directing, but the development of a project and its subsequent selling and marketing.

In 2005, a chance encounter with a Von Dutch employee led to a gig directing a European commercial for the LA-based lifestyle and clothing company. During that project, Ken got his first opportunity to work with Von Dutch Originals CEO, Tonny Sorensen, and fell in love with his vision of what the company could be and his passion for the life and artistic accomplishments of Kenny Von Dutch Howard. Sorensen offered to partner with Goldstein in a philanthropic venture, the TS Foundation (Tonny Sorensen Foundation), which had already done several projects with Operation USA with great success. They spent the next year laying the groundwork for the Foundation's art and social action support system. The effort led to the creation of AIR, their Artist-in-Residence program, and eventually, Planet illogica. For more on their story, and the story of Pi, click here.