E. Matthew ('Whiz') Buckley is a former decorated Navy fighter pilot and the founder and CEO of Strike Fighter Financial LLC, a private consulting firm. His clients include Options University and Fox3 Options, a veteran owned and operated firm.

Prior to launching Strike Fighter Financial, Buckley was the Chief Executive Officer of PEAK6 Media LLC, which founded the Options News Network in March of 2008 [1]. He hosted several financial programs including “The Options Cocktail,[2]" “Mad About Options[3]" and “The Sidewinder Report[4]". Buckley served as a military expert for Fox News when China rolled out a new jet fighter in January 2011 [5]. Buckley was also featured in two national commercials for the Options News Network[6]. He rose from the position of Managing Director of a leading Wall Street firm to CEO of a subsidiary in one year at the age of 38. The sister company to the Options News Network is the retail brokerage OptionsHouse.

In July 2010, Buckley was responsible for a new financial training system that applied the discipline and risk management methodologies he learned as a fighter pilot in combat situations over Iraq to his career on Wall Street and options trading. The program, "Top Gun Options", includes structured academics that model naval flight training called Primary, Intermediate, and Advanced. The flight training is designed to take someone who has never seen an aircraft before and make them a combat-ready Naval Aviator in the shortest time possible. Similarly, Top Gun Options can take individuals ranging from no knowledge of options to experienced options traders, and professionally train them or significantly improve their trading skills. The program includes in-depth practical applications such as Live Trade Briefs, skill-based Trade Alerts, professional Wingman Coaching, and an Options Pocket_check_list (OPCL).

Prior to serving as the CEO of PEAK6 Media LLC, he was the Managing Director of Strategy[7] for a leading Wall Street proprietary equity options trading firm called PEAK6. He was responsible for the strategic development, execution, and debriefing of all strategic plans across the firm and retail business units.

Buckley is a regular columnist on the financial website TheStreet.com and writes a column called “The Firing Line". He also writes an options trading column on Investors Observer. Buckley has appeared as an expert source in the Wall Street Journal and Market Watch.

From 2004 to 2006, he was the Director of Leadership for Afterburner Inc in Atlanta, Georgia, where he became a nationally recognized and successful public speaker. He created and deployed leadership and strategic planning products and was an executive business consultant to many Fortune 500 companies, including GE, Cisco, GM, AT&T, Sears, First Industrial, GMAC, Panasonic, Washington Mutual, Capital One, MasterCard, Tyco, and Gilead Sciences.

Buckley has written a book called From Sea Level to C Level: A Fighter Pilot’s Journey from the Front Lines to the Front Office, which combined his experiences in the military and in corporate America. The work is currently unpublished and Mr. Buckley is represented by Kelly Mortimer.

Buckley is on the board of directors for the Monica Buckley Foundation, a non-profit charity dedicated to the memory of his sister who was killed in an automobile accident while attending Villanova University. This foundation has been established to promote the education of children and adults with learning disabilities, provide scholarships for persons planning a course of study related to the field of special education, to promote services that aid or assist the mentally challenged and to support research in the field of learning disabilities.

He is a lifetime member of the Tailhook Association and a football coach for the Boca Jets and East Boca Tackle. 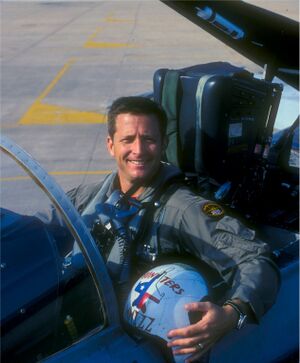 From 1991-2006, Buckley was a decorated Naval Aviator with the United States Navy serving at multiple duty stations worldwide. He was an F/A-18 Hornet Instructor and Adversary Pilot with combat experience.[2] He flew 44 combat sorties over Iraq and was awarded 2 Strike/Flight Air Medals. He was a Navy Fighter Weapons School (also known as TOP GUN) Graduate. His last squadron was Strike Fighter Squadron 201 (VFA-201), based at NAS JRB Fort Worth, Texas.

Mr. Buckley flew for FedEx for ten months before moving to American Airlines. After completing training in August 2001, he was scheduled for his first flight as an American Airlines pilot on September 11th, 2001. Upon recognizing the attacks, he arrived at Naval Air Station Fort Worth just as it was locked down and went to a combat posture.

He called down to Maintenance Control and was told by the Chief that there were four Hornets that were "FMC," or Fully Mission Capable. Buckley ordered them immediately prepped for flight as a colleague worked the other line ordering weapons to be loaded. He coordinated with the Air Force Reserve F-16 squadron on the air station, the 457th Fighter Squadron (also known as “The Spads”) who was tied into NORAD, the North American Air Defense Command, and both squadrons stood up rotating fighter alerts. Later that day, the Spads launched on a non-responsive aircraft and flew combat air patrol over the southwest United States.

Buckley went from flying a commercial airliner that day to possibly shooting down a hostile plane. On September 13th, 2001, Buckley launched and forced an aircraft to land that was heading towards presidential restricted airspace.[8] [9]

He served as a Department Head in a fighter squadron responsible for the safe operation and combat capability of 12 F/A-18 Hornet aircraft worth over $500 million. His responsibilities included the supervision and management of 200 naval personnel and material assets during combat operations. He managed the career paths and professional development of officers and enlisted personnel, managed a $25 million operations budget, and was responsible for planning, coordinating, and directing allied assets in the Persian Gulf theatre as the Mobile Targeting Officer in Riyadh, KSA, under the command of Joint Task Force Southwest Asia. He conducted briefings for the highest levels of the National Command Authority and held a Top Secret/SCI clearance. Buckley served as a senior LSO, or Landing Signal Officer. He was also awarded four Navy Achievement Medals. 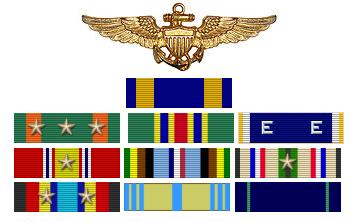