Difference between revisions of "Yagan Memorial"

The Yagan Memorial[1] is being created at the City of Swan to honour the memory of Yagan, the son of Midgigoroo and Moyran. The Memorial Park will be situated at Lot 39 West Swan Road,[2] Swan Valley, Australia. Yagan was a very important representative of the Beeliar People [3] who was instrumental in trying to forge good working relations with the first white settlers of the Swan River Colony in Western Australia.

Entry Statement to the Site by Sandra Hill

The work will have several rammed earth curved walls to be fabricated at the beginning of the pathway leading into the Memorial site. A feature visual timeline will be etched into clay tablets that meander along the full length of the walls, they will be reminiscent of the Waugal [5] moving in and out of the land as well as a connecting feature for the Burial Site. The walls, will gradually grade down until they disappear back into the earth.

The story of Yagan lives strongly in the hearts of the Nyungar people.[6] Son of Midgigooroo and Moyran, Yagan was a great leader of the Jondarup Ballaruk clan moeities. In the early years of colonisation by the British, the strangers to the area of Beeliar (Perth) were welcomed by the Indigenous people and seen as Djanga – returning spirits of the dead. As time went on, the increasing domination of the settler colony resulted in restrictions to land access for the custodians of the area, ultimately threatening their cultural wellbeing, and their relationship to country. Aboriginal resistance followed and Yagan will always be remembered for his intelligence, strength, courage and influence during this period of resistance.

As a cultural warrior, Yagan was fearless and highly respected both by his own countrymen and those of the settlement led by Captain James Stirling. Yagan’s ability to bridge the cultural gap allowed the Nyungar people a voice for negotiation and a hope for cultural exchange. However, despite the friendships he had made with several families of importance and the infamy of his character, the Nyungar people continued to be dispossessed of land, marginalized and treated with cruelty. Because of his unusual position within the new society, Yagan was able to stand up for his people, which resulted in there being reward for his capture. Yagan was outlawed and on the 11th of July 1833, was shot dead for a reward of £30 by two young brothers whom he had previously befriended. Yagan’s Head was then cut from his body and sent to England.

The repatriation of Yagan’s remains had been a long and arduous journey, not being recovered until 1997 from a museum in Liverpool. Yagan is now finally able to be put to rest in his own country with the dignity and respect so deserved of this fallen warrior.

This artwork is in memory of Yagan. The work depicts two stories; that of the life of the Nyungar people prior to the settlement, and the story of Yagan. Its positioning will be the entry to Yagan’s burial site, therefore allowing visitors to the site a chance to contemplate the loss experienced by not only the Nyungar people, but to Aboriginal and Torres Strait Islanders throughout Australia. The work is of great cultural importance as it pays respect to one of the legendary figures in Perth’s history. Among many others, past and present, Yagan stood proud and fought for freedom and the cultural rights of his people and his country. This artwork pays tribute to Yagan, a cultural hero. May he finally rest in peace. 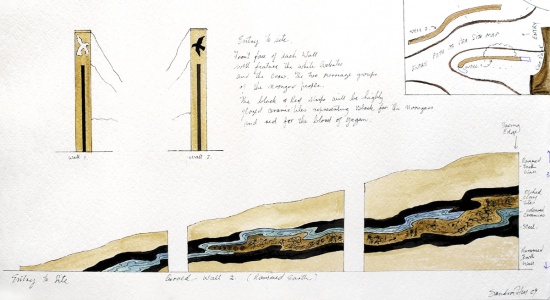 Nyoongar artists who are currently creating art works for the Memorial Site are Sandra Hill and Peter Farmer.[7] Jenny Dawson is assisting Sandra with the major story wall works.

Working team members are Tracie Pushman, Laurel Nannup and Ellen McFetridge. Roman Antoniuk has built the rammed earth walls and Peter Zuvela is documenting photographically the entire artwork process and working to install all of the artworks on the walls. 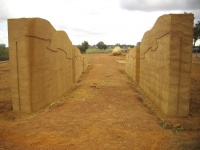