adbrite looks much more on the up and up and doesn't have pop-ups. [1] Why google why! - this looks to be a suitable replacement and better than the last one.

For my business's I'm going with adbrite because they allow individual advertisers to bid exclusively for a flat rate and other cool features. Garrett 15:38, 10 April 2007 (PDT)

I don't know who to contact - I suppose you're the most appropriate person I know! I found a bug already. It seems like the E-mail attribute is not designed to cope with URLs, just e-mail addresses (unless it's designed that way, of course). I just choose not to give a direct e-mail address [for obvious reasons] and still allow people to contact me with a web form). Nathan Richards (talk) 22:37, 19 April 2007 (PDT)

Nathan, I believe you're refering to the Personal Infobox element for "Email", which I do believe is set up to "point" to a traditional person@domainname.com type of address. There are some e-mail contact form widgets, though, that other users are embedding. That might be of interest to you. Check out this page template that Garrett Minks designed. --MyWikiBiz 08:47, 20 April 2007 (PDT)

Google offers amazing reports about who your traffic is and where they click from, when they click, how long they stay on and countless other nuggets of awesome. You just embed a bit of script into each page then boom! It also allows multiple "managers" to access the same reports, I'd be happy to add you, you would beleive the amount of information analytics can give you. And we need to add this script here - 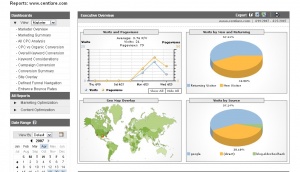 Garrett, Karl has already installed Google Analytics in the "root" menus of all Centiare pages. I've been checking our stats since January 25th. You did see the figures I reported in CentiareWire, didn't you? --MyWikiBiz 18:18, 25 April 2007 (PDT)

Now that you mention it, we're all entitled to an occasional brain fart, I think i'll embed my own analytics code into my sharethis template to keep tabs on my pages. Garrett 12:46, 26 April 2007 (PDT)

I think the featured listings are screwed up, structured settlements has been up for a few days. Garrett 18:06, 3 May 2007 (PDT)

It might improve even more after I add 20k pages - once I finish the upgrade/migration to MW1.10. Every listing will have outbound links, internal semantic tags, ASK queries & external scripts. You can see an example @ Sarbanes-Oxley/Google_Inc. What's really cool is you can now internally search on stock symbols to get SoX listings - try GOOG. Snerfling 12:12, 24 May 2007 (PDT)

The new google analytics is amazing. You probably already know this but it shows you exactly what keyword search led to them clicking on your page. For instance "quotes about driving age" led them to my car insurance quotes page. I didn't even know the centiare listing came up 7th out of a million on that search. I've been playing with it for a while and it's quite cool. Just a heads up. Garrett 18:08, 27 May 2007 (PDT)

Why does google change results on a whim like that. I clicked to find the cached minks theater page and it didn't exist. Weird?

And I guess I inadvertently started a wikipedia holy war. Hopefully we won't be blacklisted. I just hate that calton d-bag sooooo much! Good publicity or bad publicity is still publicity. If we could blow this issue out of the water think how many wikipedians with check out our site. Garrett 22:23, 29 May 2007 (PDT)