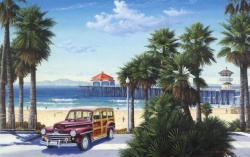 An artistic Representation of Surf Culture complete with the "woody wagon", one of the most enduring symbols of surf culture.

Surfing is the art of riding waves. Invented by the Polynesians, today it is practiced by millions of surfers around the globe. One of the most popular regions for surfing is California. The state has a number of world-class breaks, starting in the San Francisco area and extending all the way down into northern Baja Mexico. The surf forecast for California this weekend is supposed to be pretty big as a northwestern storm system approaches the coast. While the surf is not expected to be quite as big as last year's rather large Wednesday (December 21, 2005), it is expected to pack quite a punch.

Surf culture originated early in the 20th century hitting it's peak popularity during the 1950s and 1960s. It continues to evolve, spread, and grow to this day. The basis of surf culture involves the hunt for great waves, the love of surfing, and life in and around the ocean, as well as multiple other ways in which surfing might affect parts of a devotee's life. This may include fashion, music preferences, literature, films, jargon, etc. In addition, localism or territorialism is often large part of surf culture. Today, surfers come from all walks of life and from nearly every coastline where waves break in the world, making them difficult to stereotype.

The quest for perfect surf has given rise to a field of tourism based on the surfing adventure. Yacht charters and surf camps offer surfers access to the high quality surf found in remote, tropical locations, where tradewinds ensure offshore conditions. Since winter swells are generated by mid-latitude cyclones, their regularity coincides with the passage of these lows. So, the swells arrive in pulses, each lasting for a couple of days, with a couple of days between each swell. Since bigger waves break in a different configuration, a rising swell is yet another variable to consider when assessing how to approach a break.