Pennsylvania is a state of the eastern United States. It was admitted as one of the original Thirteen Colonies in 1787. Explored by Europeans in the early 1600s, the region was settled by Swedes in 1634 and granted by royal charter to William Penn in 1681. The Mason-Dixon Line (surveyed in 1763-1767) established the southern boundary of the colony and was extended westward in 1784. Pennsylvania played a crucial role in the American Revolution and in the formation of the new republic. Harrisburg is the capital, and Philadelphia is the largest city. Population: 12,400,000. 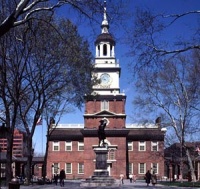