Connecticut is a state of the northeast United States. It was admitted as one of the original Thirteen Colonies in 1788. Connecticut's coastline was explored by Dutch navigators after 1614, and in 1635 colonists from Massachusetts Bay began to settle in the Connecticut River valley. The Fundamental Orders, a constitution based on the consent of the governed, was adopted by the colony in 1639. Hartford is the capital and Bridgeport the largest city. Population: 3,510,000. 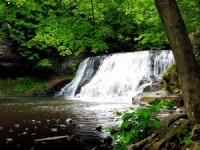 Before the arrival of European settlers in the 1500s and 1600s, Connecticut was home to a number of indigenous peoples. The Dutch navigator, Adriaen Block, was the first European of record to explore the area, sailing up the Connecticut River in 1614, and though the Dutch established a trading post, it was the British who fully colonized the area In 1633, Dutch colonists built a fort and trading post near present-day Hartford, but soon lost control to English Puritans migrating south from the Massachusetts Bay Colony.

Dutch settlers of Manhattan Island, New York, and the Puritans and Pilgrims from Massachusetts, learned of the fertility of the soil on the Connecticut River, and both laid claim to territory, but both hesitated for awhile in making any settlement. However, in October, 1633 (three years after Winthrop's Fleet had started the populating the Massachusetts Bay Colony), a small vessel sailed from Plymouth, with the design of erecting a trading-house on the bank of the Connecticut; but when they had sailed up the river to the location of the present city of Hartford, they found the Dutch had gotten there before them, and had erected a fort.

The Dutch forbade them to advance and threatened to fire upon them. The English ignored the threats and sailed right past them! They landed at a spot within the limits of the present town of Windsor, and built a trading-house there. Windsor is approximately 40 miles inland, to the north, from the Long Island Sound coast.

The next movement towards settling Connecticut was in July, 1635, when at Wethersfield a settlement was made. This settlement is about 10 miles south, or closer to the coast, than Windsor had been. Since Windsor was just a trading post, Wethersfield, then was the first English settlement in Connecticut, five year after the Massachusetts Bay Colony had begun and fifteen years after the beginning of the Plymouth Colony.

The next settlement was at or near the first intrusion into Connecticut, at the Plymouth trading-house, in the summer of 1635, by people from Dorchester. They gave the settlement the name of Windsor. The next year, Mr. Hooker, with his congregation, removed from Cambridge (then Newtown) to Connecticut and founded the town of Hartford, in between Windsor and Wetherfield. These three towns, Wethersfield, Windsor and Hartford, soon associated, and chose magistrates to regulate their common interests. At about this same time, in 1635, John Winthrop, the younger, had established a fort on the coast at Saybrook, near the mouth of the Connecticut River.

The Pequot War ensued in 1637, culminating in the destruction of the Pequot Indian Camp and massacre of many Indians by the white settlers. At the close of the Indian troubles, in 1639, George Fenwick arrived from England, and came over to take charge of the colony by authority of the "Company". New Haven, on the coast, west of Saybrook, was settled about this time, followed by Milford, yet further west on the coast, then Guilford, Fairfield, Stratford, and, in 1660, Norwich was settled.

English settlements, established in the 1630s at Windsor, Wethersfield, and Hartford, united in 1639 to form the Connecticut Colony and adopted the Fundamental Orders. Connecticut played a prominent role in the Revolutionary War, serving as the Continental Army's major supplier. Sometimes called the “Arsenal of the Nation,” the state became one of the most industrialized in the nation.

From the first, Connecticut enjoyed a great measure of political independence, proclaiming in its Fundamental Orders of 1639 a democratic principle of government based on the will of the people. These Fundamental Orders are said to have been the first written Constitution of a democratic government; that's why Connecticut today is nicknamed "The Constitution State." Meanwhile, the Puritan colony at New Haven adopted its own Fundamental Agreement, proclaiming the Scriptures to be the supreme law in civil affairs. Despite their differences, the two colonies were joined (under a royal charter in 1662), and together they formed one of the more fiercely independent of the original 13 British colonies, defying the crown as early as 1687 and contributing huge numbers of troops to the Revolutionary War effort.

Connecticut's homogeneous, community centered form of government, out of the mainstream of royal imperial affairs, remained focused on the town and its people. With events of the impending Revolution espousing the principles of freedom of expression, Connecticut began to move away from a solely town focus and look out toward the broader community of colonies opposing Royal authority. Connecticut people fought on both sides of the conflict, with many Loyalists migrating north and east to Canada and its eastern provinces.

During the American Revolution, Connecticut gave freely of her blood and wealth. Her soldiers were on the battle line from Quebec to Carolina. It was General Israel Putnam at the battle of Bunker Hill who cried: "Don't fire until you see the whites of their eyes!" Patriot-spy Nathan Hale, as he was about to be hanged by the British, said: "I regret that I have but one life to lose for my country."

By the end of the Revolution family farms were unable to support the large number of young people in the area. The population boom made it necessary for more and more descendants of original settlers to leave for the north, west, and south to provide for themselves and their families. Cheaper, available land elsewhere provided much of the motivation. Farms gave way to the newly burgeoning Industrial Revolution, and new ethnic groups wended their ways along the Long Island Shoreline of Connecticut's growing metropolitan areas.

To George Washington, Connecticut was "The Provision State" because of supplies contributed to his army by Gov. Jonathan Trumbull - the only Colonial governor, incidentally, to support the cause of America's independence from Great Britain.

After independence was secured, Connecticut quickly got down to business. Textile and paper mills, along with metal forges and shipyards, were the state's industrial mainstays and attracted immigrants from across Europe, such as the Portuguese who settled in Mystic. Once the trauma of the Civil War passed, industrialization increased, slowed only by the hard times of the Great Depression.

From 1703 to 1875, Connecticut had two capitals; sessions of the General Assembly met alternately in Hartford and New Haven. Since then, the capital has been Hartford.

Connecticut has prospered with the growing importance of service industries, especially insurance (dozens of companies are headquartered in the state, with Hartford being the unofficial insurance capital). Its proximity to New York City makes Connecticut an important business center, as well as the site of many of New York's suburbs. Thus, the state's fortunes are tied very closely to the economic health of New York and the nation.